Roberto IZ7VHF and his son Riccardo are happy to receive their Ultimate3 kit. I hope they aren't planning to eat the U3 kit as well as the GPS module.

Ultimate3 built by Brian G0MJI. The square board with the green lights is an SKG16B GPS board, with a useful antenna that just about reaches outside. The other board (right) is a 5V regulator, useful for experimenting with higher PA voltages.

Ultimate3 in a Tea Box by Hansjoerg HB9EWH has been heard at first try in the US with an NVIS antenna not planned for 20m DX at all (low hung L-antenna with 30m wire). The case has a British touch being a tea box in earlier life...

Latest from Brian G0MJI - "This is my U3, fully filter loaded, with Sure GPS, 5V regulator and on-board firmware updating. I will move the switch to the back (it disables the relays) at some point for aesthetic reasons."

Not content with one Ultimate3? Make a pile of 3, this is Brian G0MJI's setup now! Top and bottom U3's are in homebrew cases (bottom U3, see above photos), the middle one is in the QRP Labs U3 case. Top and bottom U3 displays show the GPS satellite information (firmware v3.06 and above). Bri managed to capture the beating 1pps (GPS) heartbeat on the display. Even more impressive, the ray of sunlight coming through the window and illuminating the U3 stack! Sunshine? England? Eh?

Ultimate3 by Roger G3IUZ - "I am delighted to tell you that with the Ultimate 3 now fully completed and boxed up with 12 v and regulated 5v and 3.3v supplies it is working brilliantly on 6 bands (40m, 30m, 20, 15m 12m & 10m) with GPS implemented with no problems whatsoever.

As a newbie to WSPR I am completed gob-smacked with the results so far - reports from VK2,3,6 & 7, W east to west, VE, TJ3, LU and, of course, all over Europe and ME.  All this on a short off-centre multi-band dipole at 20ft with no tuner.

Very many thanks for making this possible with such ease.  I say again, what a super kit in every regard!  Once over the novelty I shall be using it for aerial development in a very restricted QTH with all the limitations of being Grade 2 listed and in a Conservation Area to boot!!

Hope the pics are interesting.  The GPS board is in a redundant plastic camera lens filter case mounted on an aluminium base for stability.  (Big advantage - other hobby model engineering with lathe and mill in the workshop!)

The box I have used is just a standard diecast one 190x120x50mm.  The front controls are:  top left – p.a. FETs supply  12v or 5v;  top right – mains on/off; bottom left and right – sprung miniature toggle switches for programming. I have used three FETs in the p.a. with a small heat sink super-glued to them as a precaution.  The 12v unregulated linear DC supply is ex an ancient desktop calculator (!) from the junk box and the small 5v and 3.3v regulator boards are cheapies from Ebay.  On the rear of the box are the BNC aerial, mains and GPS (Bulgin 400 Series Buccaneer) connectors.  Just to keep things nice and cool for continuous running I have fitted a 40x40mm miniature 12v extractor fan in the base cover plate."

Boxed U3 by Konstantinos SV1ONW using the QRP Labs U3 case. Konstantinos used the additional space available in the case to add his PSU board, to feed everything from his favourite 12V /2 Ah LC-R122R2PG Panasonic Lead-Acid Battery.

Monster U3 by Andy G0FTD. The box contains PSU (including transformer) using LM317 variable regulator for the PA voltage, 136kHz/475kHz ATU. One meter is the PA current, one is a field stranghth meter to facilitate optimal tuning of the internal ATU. There is also a 6.3mm jack socket on the front panel for using it as a basic CW TX. The long vertical bar to the right hand side in the internal pictures, is the ferrite rod tank coil for 136/475kHz.

Nicely finished U3 by Alfred PA7AL. The rig was running for 2 weeks at this time and best DX is ZL. Antenna is a FB-23 up 7m high and 150mW output.

Customised U3 enclosure by Ton PA1PXL. Ton uses the official QRP Labs U3 Case but added his own customisations! The LCD used in the U3 kit is a standard HD44780-compatible 16 x 2-row LCD. Many LCD's are easily available of the same size. Ton got one with a red backlight to make his U3 a bit different. He also used a Green LED as power light, and a green Menu button! See Ton's blog here.

Here's another nice photo from Toru-san showing THREE Ultimate3S kits! The third one is on a dummy load because in Japan they cannot operate the standard 160/80/60m WSPR frequencies due to band limitations.

U3 with BS170 heatsinks, construction info and Power measurements, by Marcel ON7DY

The final config: two U3s: one for Daytime, one for Night. An A/B switch, and a QRP Wattmeter. Signal fed into a Z-11 Pro ii autotuner, into endfed with 9:1 un un.

Jürgen writes: "It will be my third Ultimate, great design and excellent performance. WSPR around the clock...GPS controlled...fully automatic...perfect for oom. Pictures attached show the U3 and even .... /mm with minimum equipment."

Here are two very nicely boxed U3S by Stig OX8PZ. Both are multi-band and have the power supply built in. I like the idea of using a single toggle switch as the front panel input (in place of two buttons). It should be the type of double-pole switch with a no-connect centre position, that is sprung. Pulling the switch to the left or right has the effect of operating the two U3S buttons.

Stig writes: "I have used some veroboard to get the display turned to the rest, for geting the heat to not reach the osc. and to get easy to switch the LP filters and the osc. "

Here's Geir's U3 transmitter, and a map of the WSPR results on the first day's operation on 30m. He's installed four BS170 transistors with a copper plate for cooling, but using only a 5V PA supply. The antenna is a dipole, perfectly tuned, with a 1:1 balun. "The two DC-DC LM2596 step-down converters shown in the photo can handle up to 40 volts input. Both are giving 5 volts at the moment, but the one to the right will be adjusted up slowly, until I get around 1 watt tx output. The left switch on the front panel is used to turn off the display, while the U3 still works".

Boxed U3S with OCXO and QLG1 GPS by Mike NE5U

This is a nice photo showing a lot of QRP Labs kits together!

Nicely boxed U3S! Clayton writes: "Hi Hans, I thought you might be interested in my U3 assembly. Photos attached. I have placed it into a waterproof ammo box, complete with battery, solar controller and GPS. It is now “field-deployed”" in my back yard, with a 30m dipole connected above. Thanks for the excellent kit!"

Geir LA6LU with two U3 kits at his cabin

"I have three independent solar power systems at my cabin. The system where the U3's are connected has a battery  bank of 460Ah's, charged from 500watts panels. That is more than enough to keep running the two U3's 24/7/365 even at the winter here."

Here's Jon Ove's battery-powered U3S all ready for a trip to the mountains of Fuerteventura in EA8! The QLG1 works very well even installed right next to the U3S, and with the lid closed. Jon Ove writes: "the battries are standard LiPo 18650H batteries that I salvaged from laptop battery pack.
Using TP4056 charger board (e-bay).
At the moment I have not included low voltage shutdown, will probably use a relay for that.
Using a small buck down converter placed under the display that gives 6.4 V output to the PA-transistor and is followed by a LM1117 LDO regulator for the 5V supply."

Earl's project box is re-purposed from a flea-market purchase. He reports that the QLG1 GPS receiver has no trouble receiving 9 or 10 satellites even inside his building which has a reinforced concrete roof!

Len writes: "I brought the green led out the front panel where the unused toggle switch was. I also added the other two transistors and built a small heat sink. I tuned it according to the “PA bias study”. Before I turned down the bias voltage I was putting out just under 400mw, the transistors ran very HOT. After setting it to 2.19v it dropped to around 250mw but ran significantly cooler. (Running at 5v.)"

Len installed the QLG1 GPS inside the U3 Box and built a new rear panel to accommodate a external GPS antenna connector. [Note, the quoted 2.19V bias is an example only - it was the result of the "idle current" adjustment method in one case - it will vary from device to device].

Many impressive photos by Kees PE0CWK

Kees PE0CWK has documented his comprehensive U3 kit build with 76 photographs, including schematics, measurements, maps as well as detailed photographs of his build. In addition to the three samples below, please click here to see his complete albums!

Derek GM7TFP built the QLG1 GPS into a standard Hammond case, CPC/Farnell part EN84150, which is a good match for the U3S in its QRP Labs case. The QLG1 is wired to use an external antenna. There are no ill effects from putting the GPS box on top of the U3S. Derek has also recently completed the clock kit.

I liked this one SO much, and Dave provided a good description, which I put on its own page here! 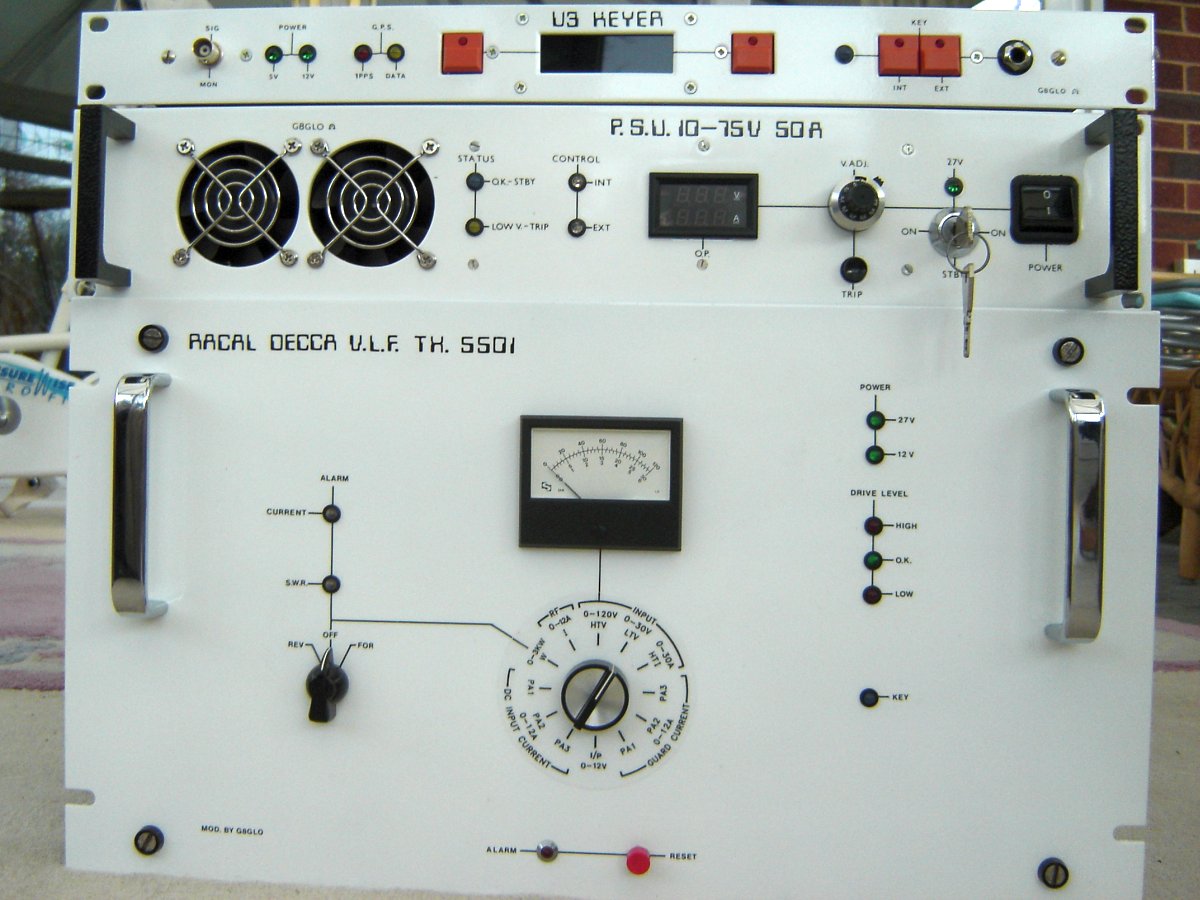 This is an OCXO-version U3S built by Ruediger DJ4KI. He says "My wife was reading the instruction (hi) and I am soldering." - I love it. Tried to get my XYL to help once... but Facebook kept interrupting. Ruediger also points out several homemade high and low-pass filters on the left side, for measuring; and the three BS170 are producing 1.4Watts HF RF.

Later update from Ruediger - the photo on the right now with TWO U3S kits!

"My U3S uses a single BS170 and is housed in a diecast box with the GPS board. I took a chance and did not use screened wire for the connections between the 2 boards. All is fine but I did keep the lengths short and my 630m push pull amplifier is in a separate box.

"Transmitter output was 50 Watts but on MF the antenna was probably -13dB ish."

Luci uses a U3S as the basis of this 4m PI4 beacon which is the official PI4 beacon for Montenegro (as 4O0BCG). It uses a uBlox GPS, U3S with modified LPF (to 4m) and his own 4m PA to reach 10W output. Luci has a description in this forum post and also a video, see builder's video page.

Jeff uses the QRP Labs U3 Box and his U3S is built for 630m, with QLG1 GPS receiver also in the box and a coax connector for an external GPS antenna.

Marcel built this U3S for his friend Marc ON7EE. There are several interesting points to note:

Marcel measured the following power output with 1 BS170 transistor at 5V, and 3 transistors at 12V:

Marcel has built a WSPR transceiver consisting of both the U3S and the Receiver module. On 27-Dec-2016 he copied ZL3GA and was copied by ZL3GA. His photos and WSPR map are on this page.

"...some photos of my solution with the U3S in the case. At first I integrated the GPS board and added an active GPS antenna via SMA connector. Next was to build in a LiIon 18650 battery, so I have two methods for the power supply. "